This is a story about racism... 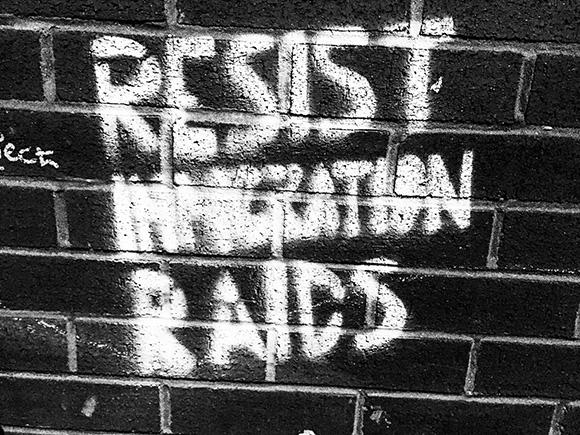 If racism is the inability to be wilfully colourblind, then I am a racist. I'm sorry, but if the aim is to pretend that we don't perceive differences in appearance, then I feel that anti-racism is doomed, because it's dishonest. Instead, we should talk about what's really going on; be truthful.

Of course, my default position as a member of the metropolitan elite, is to say that I'm not a racist. To be a racist in polite, educated, civilised middle-class circles, amongst professionals, is unthinkable. There is a viceral rejection of any slight hint that we - educated middle aged white people - might possibly be a bit racist. However, it's there - in some [small] part - and we should talk about it.

Children are a good benchmark, because they have a tendency to be much more honest, unfiltered and uninhibited. Children aren't subtle and devious, and generally haven't learned to hide or disguise what they really think. In fact, adults aren't great at hiding what they really think either. Everyone knows that "anti immigration" really means anti-non-white (i.e. racism).

We should acknowledge that children will, quite naturally, bully and otherwise victimise minorities who look and act differently. Children are vicious animals who will attack anything "other"... but where does that animal - bestial - behaviour come from?

The Price equation shows us that it is a rational strategy for a person to attack and/or kill anybody who does not look similar, even if the attacking/murderous individual is killed or injured in the process. In fact, our genes encode racism into our very fabric. We are evolved to attack those who are obviously genetically unrelated from us - this can be mathematically proven to confer an evolutionary advantage. Unfortunately, at a bestial animalistic level, we are hard-wired to be racist.

Of course, we are not animals. We are not children. We are civilised people. However, we are animals, and we can easily regress into childish bestial behaviour.

That is what is happening.

Spend a moment watching Donald Trump or a Brexit voter speak, and imagine their words coming out of the mouth of a child. Do you see how the words match perfectly with a mental age of a child? We have entered an era when infantile idiots are given a voice - a platform - and they have clumped together with other thick-skulled neanderthals, and are now brazenly dragging civilised society back into the dark ages; back to a place of rampant racism, mobs, hysteria and bestial behaviour.

But, calling racists racist hasn't got us anywhere.

It's not surprising to me that 51.9% of the UK is racist, because most people in the UK are very stupid and immature; we do not have a society full of educated individuals, but instead a mountain of morons. Take a look on Facebook, where racists like to congregate, and you can see a pitiful display of bad grammar, spelling mistakes and sentence construction which would make any decent educated person blush with shame. Instead of reading good books, the racists spend their time share their views with other near-illiterate racists, hammering on their keyboard with their clumsy fists.

Calling racists racist hasn't got us anywhere, but we do need an outlet for our frustration with them.

So, am I colourblind? Absolutely not. It would be an absolute lie if I pretended that I was unable to make an educated guess about a person's ethnic background based on their skin tone, along with other clues, such as hair and facial features. Likewise, I can probably make an educated guess about where a person grew up based on their accent. To claim that I couldn't do such a thing would be disingenuous.

Do I discriminate? If the question is whether I go out of my way to thwart, undermine or otherwise prevent a non-white person from enjoying the same opportunities as a white person, then the answer is no, I do not consciously do that. I do - absolutely - change how I speak and act, depending on my audience. If I'm speaking to somebody who doesn't speak English fluently, I will simplify my language; slow my speed of speech; speak with clearer enunciation. I do discriminate, but I don't do so maliciously.

Am I guilty of unconscious bias? Absolutely. The whole point of unconscious bias is that I'm not even aware it's there. I've grown up in a society dominated by whites, so it's totally expected that I am riddled with all kinds of prejudices and biases, which I haven't been able to iron out and get rid of through sheer force of will and hard work, although I do try my hardest to think in an inclusive and unprejudiced way.

Am I guilty of white privilege? Yes.

Whoever said "it is not enough to say you aren’t racist, you have to be anti-racist" summed it up very well. Knowing what we know about the Price equation and our genetic predisposition towards racism, we have to fight against our DNA. Genes are risk not destiny so it's not true to say that because our genes code for racism, we are automatically racist, but if we do nothing then we do revert to racism as a default position. This is why we have to actively choose to be anti-racist; our natural instincts are wrong and this is why populism has led to terrible things.

These are my thoughts on a charged subject, and I expect I have made mistakes. I hope to be corrected.

I realise that "colourblind" is an aspiration - although unachievable literally - which metaphorically means treating people exactly the same, regardless of skin tone. I think that when racists speak out against multiculturalism, they are really saying that they hate non-whites; they don't hate Northerners or Scottish people moving to the south of the UK, for example, despite the cultural differences. For my part, I think that the "melting pot" as exemplified by London, is the ideal picture of modern society, although of course it suffers socioeconomic segregation and many problems. I think that we should aspire to the level of multiculturalism and tolerance we see in the capital.

I also see that I am prone to being too literal sometimes. For example, "Semitic" relates to both Hebrew and Arabic, therefore Islamophobia is anti-Semitic, technically and literally, although it's so often used to mean "Jew hating" that the literal meaning is not relevant and I realise it's wrong to point out that quirk of etymology.