This is a story about learning through doing... 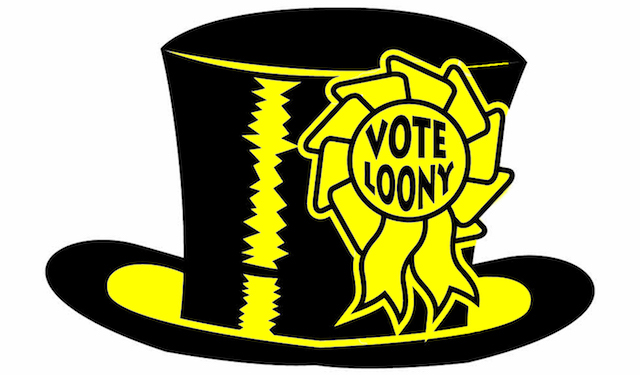 Why would somebody try to enter politics? Because they think it's easy? Obviously, there are an immense amount of obstacles in the path of anybody who seeks to challenge the two-party status quo, where the electorate mistakenly believes that any vote cast for a smaller party is a wasted one. It's specifically because it's such a hard challenge - to learn the complexities of the UK political system and stand for a seat in parliament -  that one would wish to do it. I want to do it just to learn how it all works.

The Monster Raving Loony Party are quite helpful to would-be Members of Parliament who are lunatics. They've furnished me with a step-by-step guide, which I assumed would be quite useless for a long while. I thought I would have plenty of time to prepare for a local by-election or an early general election. Bloody Tories. I'm wrong-footed from the very beginning. They must have heard about my political ambitions.

I now need submit the names of 10 people on the electoral roll in my constituency, who are prepared to back me as a political candidate: Manic Grant of The Monster Raving Loony Party. Then, I can start campaigning for votes.

The Tories and Labour are membership-driven organisations, and as such, their MPs will have to campaign under their party's manifesto and be constrained by a national political agenda. Any Labour or Tory politician who offered to fight to reverse our exit from the EU, would be making false promises, given that both parties are committed to acting on the 1.9% majority, who wished for the UK to leave the European Union at the time of the last referendum.

Monster Raving Loonies are more akin to independent candidates, in that each prospective MP can have their own manifesto. Should the Loonies gain the majority of seats in the House of Commons, then the party would struggle to elect a leader and form a cabinet, let alone agree on anything and successfully govern. It's rumoured that the Loonies have only one election promise: to call another general election if they win a majority. However, that rumour is untrue.

There is a deposit that has to be paid and other electoral expenses, but most Loonies can enjoy a certain amount of free publicity, public goodwill and donations from bookmakers - many betting men and women like to have a flutter on the prospect that a Monster Raving Loony MP is elected, or even that the Loonies win the majority of seats.

Politics has moved towards the centre and money has flooded into Labour and the Conservative party, from wealthy donors hoping to buy themselves political favours or even a peerage. This money pays for national advertising campaigns, branding, PR, spin doctors and a whole host of other advantages not enjoyed by the smaller parties. The immense size, power and wealth of the entrenched top two parties, plus their bland centrist manifestos, has been a massive turn-off for many eligible voters, fuelling a general disinterest in politics.

So many - especially younger - people believe that politics has no bearing on their lives. This widely held view has proven to be a massive success for those in power, who have governed without the constraints of an electorate who connect their daily struggles in life with the failings of their government.

The EU referendum seemed to awaken politically dormant segments of the electorate and highlight a lot of ordinary people's frustrations with the political machinery. However, it was a binary vote on a single policy issue. It seems unlikely that many of the voters who otherwise considered themselves disinterested in politics, are now going to be active participants in the general election.

What is a general election anyway? A vote for a colour: red or blue? Certainly, a lot of money is spent telling you that there are only two horses worth backing and that a bet on any other is a waste of time & money. Nobody likes to be on the losing side, do they?

With UKIP's aim seemingly achieved, much of the populist vote will swing with the weather on the day. If it's nice and sunny, why not vote Tory? As the days grow longer and it starts to get warmer, things seem to be improving. The stats show that weather is the best predictor of whether the incumbent government retains power or not. June 8th ought to have a good chance of being a nice day.

Corbyn has successfully divided his party and Labour supporters, into true socialists who have principles and stand resolutely by their beliefs, and idiots who just want to seize power at any cost. "New Labour" is a synonym for "nothing to do with the labour movement or the working class". It's true that the working class haven't held much political power historically, so successful election campaigns have sought to appeal to middle class greed, fear and bourgeois aspirations.

Who could ever vote Liberal Democrat again, after they formed a coalition with the Tories? What a betrayal of trust! What an absolutely disastrous outcome! What unimaginable horror!

We desperately need political reform, with proportional representation and preferential voting. The current system actively discourages voting for a smaller party, lest they form a coalition with the Tories, like the Lib Dems did. Perhaps voting slips could just contain an "anybody except the Tories" box.

Through all this complexity and excessive media fixation on politics, we the people, feel overwhelmed and unable to participate in the democracy that supposedly serves our interests and concerns.

I write this with a broken wrist, while heavily medicated for the pain of torn muscle and ligaments in my leg. Trapped and damaged nerves are slowly repairing themselves, which is uncomfortable at the best of times, and agonising at others. My cash reserves dwindle rapidly and bankruptcy and destitution beckon. I desperately need to be working, but I might need to have an operation to repair damage in my leg. I can't imagine having to use a mouse and keyboard all day, five days a week, and commute to work on my damaged foot/ankle. I can't imagine having to concentrate on work, when I'm on so much medication.

I was looking forward to playing around in the UK's political system when the opportunity presented itself - which it now has - but I've not yet even been able to deal with the more pressing concern: getting back to work before I run out of money.

So, it looks like professional politicians win again. I'm too embroiled in the struggle of daily existence to participate in the political games. Only those privileged few - especially public schoolboys - are able to involve themselves in the matters that affect the lives of every UK citizen. It seems like a great injustice and a perversion of what democracy is supposed to be about.

Like many of our wealthy professional politicians, I have been away from the seat of power, enjoying an Easter holiday. Perhaps I will be sufficiently enthused by politics when I get back to London later this afternoon - closer to the Westminster bubble - to overcome my depressed hopelessness. It would certainly solve my lack of a job, if I was elected as a Member of Parliament.